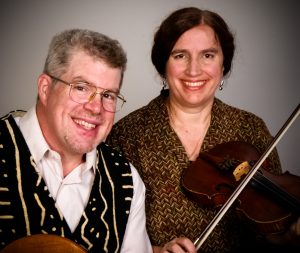 Music from the Blue Ridge Mountains of Virginia

Kim and Jimbo Cary have been performing music in Central Virginia for over 20 years. They have performed at numerous venues in Charlottesville, Albemarle County, and across the Commonwealth — including: Monticello, Castle Hill, Ash Lawn, Montpelier, Wintergreen, Red Hill, Michie Tavern, Pharsalia, and more.

“What a great addition your music was to our event last week. It was perfect.”

When dessert is served, guests will enjoy a mini-concert of Virginia music and history.

Music of Old Virginia (a mini-concert):

Kemp’s Jig: an English dance tune to honor the Jamestown settlement in 1607. Performed on mandolin and wooden whistle.

Washington’s Victory: Jimbo plays tin whistle, accompanied by Kim on frame drum, on this ballad about Lord Cornwallis’ surrender at Yorktown. The tune, The British Grenadiers, is an old march that may have been played during the surrender ceremony, in which the British troops laid down their arms on October 19, 1781.

Hop High Ladies: a Scotch/Irish song performed on jaw harp and bones — in honor of the Scotch and Irish immigration to Virginia.

The Batteau Song: describes transporting tobacco and other cargo down the James River to Richmond. The batteau were large wooden, flat bottom boats of the 19th century. Performed on the gourd banjer — a replica of a 19th century banjo developed by African Americans.

Abe’s Retreat and Fall of Richmond:  performed on 5-string banjo and fiddle, commemorating an early Confederate victory and the Union capture of Richmond in 1865.

Wreck of the Old 97:  a song about a 1903 train wreck in Danville, Virginia — performed on banjo and guitar.

“An excellent performance by seasoned musicians. You have the audience in the palm of your hand.”

Kim & Jimbo’s music has been presented at cultural centers, museums, festivals, concerts, and private receptions in over 50 cities and counties across Virginia. Jimbo took first place in the Virginia State banjo contest and the Carys have been nominated for the Governor’s Award for the Arts.