Rhythms ‘Round the World / Schools

Rhythms ‘Round the World

A tribute to Virginia’s Native American and immigrant ancestors from the British Isles, Europe, Africa, Asia, and the Middle East.

Rhythms ‘Round the World

is a musical tour of Europe, Africa, Latin America and Asia. Students will listen and  play along with an Irish jig, a Mexican waltz, an East European frailach and West African dance rhythms.

The program begins with Native American flute solo and may include an Irish tinwhistle and bodhran duet, string music from Mexico, and West African style drumming.

The Carys will bring their “traveling music museum” — a collection of more than 200 world percussion instruments for students to play along. Students will play gourds, washboards, agogo bells, African drums, bamboo rico-ricos and more. All programs are interactive and culminate in a student percussion jam led by the artists.

Hands-on activities with over 200 percussion instruments for students to play.

Music From many Cultures

Virginia Commission for the Arts grants may provide up to 50% of the performance fee. Discounts are available for multiple performances and afternoon shows.

The Library Song was written for children learning to read. Please Keep Wild Animals Wild is about wild animals of Virginia.

Suitable for elementary students and teachers will enjoy it too. 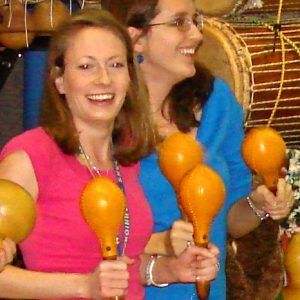 Kim & Jimbo have been performing and teaching traditional acoustic music for over 20 years. They have reached more than 200,000 children and families at schools, libraries, museums, and festivals throughout the state.

Take a musical tour of the world with Kim & Jimbo Cary.

“Days later, the teachers are still coming up to me to say how much they liked it. The program was active and engaged the children at every point. The display of your hundred or so musical instruments made the program visually as well as aurally rich and introduced the students to a wide variety of unusual instruments in a manner that left me feeling as though I had toured the world. The finale was spectacular.”
– S.A., PTA president, Yancey Elem